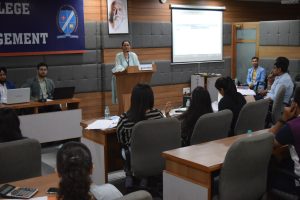 E-Cell of Sri Aurobindo College of Commerce and Management organized a Mock IPL Auction Event “FANTASY ECSTASY” on 10/09/2021 which was open to all the students of the college. The event received a tremendous response with more than 50 teams participating in the preliminary round ” FANTASY LEAGUE ” held on 08/09/2021 which was a type of mini auction held through google forms where teams had to form their playing 11 through a list of 40 players presented to them. The top 8 teams from the preliminary round were selected to compete in the final round.

The induction for the finalists was held on 09/09/2021 where they were guided about the rules and procedures of the final event. On the same day, an auction was also held for the IPL franchises. The final day i.e. 10/09/2021 started with an opening ceremony marked by an enlightening speech by Dr. Marinal Gupta (Officiating Principal). The player auction began at exactly 10:00 am with some exciting bidding over marquee players in the beginning. The teams were allotted the virtual currency with a fixed budget. The bidding was held in 5 sessions and the teams were given strategic breaks at regular intervals. The auction ended at 03:00 pm followed by the Valedictory Ceremony.