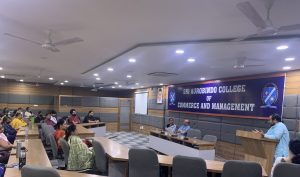 For commemorating the teachings of Sri Aurobindo to the members of the faculty, Sri
Aurobindo College of Commerce and Management, Ludhiana, organised an interactive
session on sri Aurobindo’s philosophy. The key speaker was Mr. K.Pawan, Chairman, Sri
Aurobindo Society. He enlightened the faculty regarding Sri Aurobindo’s Philosophy. He
stated that Knowledge, according to Sri Aurobindo, is an integral consciousness of the
Reality in all its integrity, which is not created but discovered. It is not an activity but truth
itself. He laid emphasis on man’s spiritual consciousness. He also stated that knowledge is one indivisible whole in which the highest and lowest are linked through all the mediating links. The vote of thanks was given by Dr. Manpreet kaur. The lecture turned out to be very insightful.